A Selection of Titles 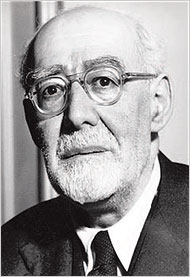 Leo Baeck (above right, 1873-1956) was a leading German Reform Rabbi and the leader of German Jewry during the Holocaust. Baeck's father Samuel was also a rabbi. In 1905 the younger Baeck published The Essence of Judaism, in response to Adolf von Harnack's The Essence of Christianity. This book, which interpreted and defended Judaism through a prism of Neo-Kantianism tempered with religious existentialism, made him a famous proponent for the Jewish people and faith.

Leo Baeck and his wife, Natalie, had one child, Ruth, who married Hermann Berlak, an accountant, in 1923. Ruth and Hermann Berlak had one daughter, Marianne. As conditions in Germany worsened, despite his many opportunities to emigrate, Baeck chose to remain with his people in Germany. In 1933, after the Nazis seized power, Baeck worked to defend the Jewish community as president of the Reichsvertretung der Deutschen Juden, an umbrella organization that united German Jewry from 1933 to 1938. After the Reichsvertretung was disbanded during the November Pogrom, the Nazis reassembled the council's members under the government controlled Reichsvereinigung. Leo Baeck headed this organization as its president until his deportation. On 27 January 1943, he was deported to the Theresienstadt concentration camp, where he became the "honorary head" of the Council of Elders (Judenrat) in Theresienstadt.

Natalie Baeck died in Berlin in 1937. Following Kristallnacht, Marianne was sent to England on a Kindertransport. Despite deplorable conditions, Leo Baeck survived his imprisonment in Theresienstadt.  After the War, Baeck lived in London, taught at Hebrew Union College in America, and became Chairman of the World Union for Progressive Judaism.

In 1950, Marianne married A. Stanley Dreyfus (above left), a recently ordained American-born Reform Rabbi whom she met while accompanying her grandfather, Leo Baeck, on a trip to the US. Rabbi Dreyfus himself went on to a very distinguished career as an American Reform Rabbi, serving congregations in Indiana, Texas and New York.  He was the rabbi of Union Temple of Brooklyn, NY from 1965 to 1979, and then served as the Director of Rabbinic Placement of the Central Conference of American Rabbis (1980-1991). He taught Liturgy and Commentaries at the New York campus of Hebrew Union College-Jewish Institute of Religion for over four decades and chaired the Liturgy Committee of the CCAR from 1975 to 1979, overseeing the publication of the Reform prayerbooks Gates of Prayer, Gates of the House, Gates of Understanding, and Gates of Repentance. And he was an avid book collector.

A. Stanley Dreyfus died in 2008, survived by Marianne and, among others, Rabbi Ellen Weinberg Dreyfus, his daughter-in-law, and, true to family history, Rabbi Elizabeth Richman, his granddaughter-in-law.

Below is an assortment of books from Stanley’s and Marianne’s Library, reflecting their connection to the legacy of Leo Baeck and to Stanley’s interests in Liturgy, Jewish history, and the Reform movement.

Please also search our online inventory of over 8000 titles in Jewish & Holocaust Studies at our Judaica Search Page. You’ll also find interesting and unusual titles in related and overlapping fields in our recent catalogs, all online at www.DanWymanBooks.com.

As always, every item is offered subject to prior sale and is 100% returnable for any reason. Domestic shipping is generally $5.00 for the first item and $1.00 for each additional item. International shipments are at cost, generally $17.00 for smaller-size items and $30.00 for larger size items.

All prices are in US Dollars. We prefer payment by credit card, but we also accept checks in US funds or www.paypal.com. We will also gladly invoice your institution. Please do not order via fax at this time.

To order, please email us with your requests to [email protected].

PLEASE ALSO LET US KNOW IF YOU WOULD LIKE TO RECEIVE OUR LISTS OF OUT OF PRINT JUDAICA TITLES by emailing us at [email protected].

Special thanks to Chris Sheehan, Jonathan Anderson, Mirjana Etzold, & Anna Chapman for their outstanding work on this catalog.

We look forward to hearing from you and to working with you to build your collection.